Save ParisSeeking Density Paris Demolishes Little School in the Prairie 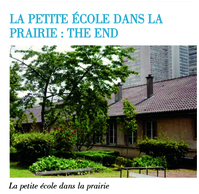 Image and caption from the SOS Paris Bulletin

Seeking Density Paris Demolishes the Little School in the Prairie

Skyscrapers are not Paris City Hall’s only adventure in misguided urbanism. City Hall’s 2016 modification of the law of urbanism (Plan local d’urbanisme) requires more densification–although Paris is already the densest city in Europe–and more vegetalization of roofs and terraces.

Thus, in its mad quest for densification City Hall has destroyed the Little School in the Prairie (La petite école dans la prairie). Yes, that’s the real name. It was a primary school in the 13ème, with a garden. A replacement school will be squeezed in between two mid-rise concrete blocks–with plantings on their roofs–but no garden. Christine Nedelec, the Secretary-General of SOS Paris, reports that a street artist came and helped the children paint their building to make a work of art before it was bulldozed away. She reported these events in a fine article in the SOS Paris Bulletin.