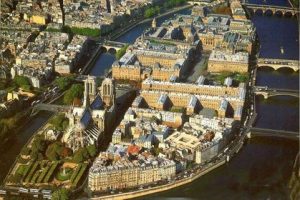 The Ile de la Cité includes the exquisite Ste Chapelle, the Palais de Justice or courthouse, and the Conciergerie, the prison where Marie Antoinette was held. The courts have met there for a thousand years. The sick have been treated in the hospital called the Hotel Dieu since the seventh century. You will find a good history of the Ile de la Cité on Wikipedia.

The new plan to make the Ile de la Cité into a sort of theme park, as originally announced by the office of the star architect Dominique Perrault and the Center of National Monuments, and now embraced by Paris City Hall, is to empty out most of the urban functions that now make the Ile de la Cité a vital part of the city of Paris, and to turn the former government buildings and the hospital into housing, hotels, and tourist boutiques.

This page is under construction. . . .