Parisians Fight Back. On October 4, ICPP’s colleagues in France at SOS Paris launched a new legal attack on the building permit for the Tour Triangle by Herzog and de Meuron. This pointy monstrosity was first proposed in 2008, and opponents have been fighting it ever since. At 590 feet it would not just far surpass the typical six- to eight-story height of buildings in Paris. It would also approach the 722 feet of the hated Tour Montparnasse. Joined by two other associations, SOS Paris argues before the Administrative Court, according to the collective’s press releases, that the project is not a private project in the public interest, as Paris City Hall says. In fact, it is a public project for City Hall’s benefit.

The Tour Triangle is City Hall’s Effort to Make Paris Look “Modern,” Not a Project for Private Profit

Paris does not need office skyscrapers. Any skyscrapers City Hall proposes are a PR stunt to make the city look “modern.” City Hall thinks corporations will flock to Paris if it is only “modern” enough. As for the theory of opponents’ case, the Tour Triangle would occupy city-owned land. Rumors say that City Hall never demanded genuinely competitive bids for the lease. Instead, the city gave it to a favorite developer. That certainly sounds like a project that City Hall is manipulating, not one that a private corporation designed to make a profit.

International Coalition for the Preservation of Paris, ICPP 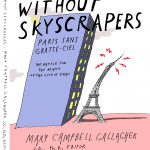 Next Story:
“Stop Skyscrapers in Paris”