Save ParisHow Paris Was Destroyed

How Paris Was Destroyed

When the masked thugs of ISIS swing their sledgehammers through Iraq’s museums and dynamite Palmyra, the world gasps and screams. But what if the vandal is a chic Parisian woman wearing high-heeled boots and talking like a visionary? What if her target is the world’s most beloved and most-visited city? Does the world gasp, or does it not even hear what she is saying? “We’ll always have Paris,” Rick tells Elsa in “Casablanca.” Yet now, Mayor Anne Hidalgo says she will “reinvent” Paris. Without putting it to a vote, she will replace the uniquely harmonious city we know with something “modern” and “contemporary.” She will pierce the low horizon with a dozen skyscrapers, replace classic stone facades with rivers of glass, and bury the famous zinc and slate rooftops under new
construction. Mon Dieu! Doesn’t anyone get what Paris is doing to itself?

Wake up, world! Mayor Hidalgo will march through Paris like Attila the Hun. Cooing soothing words from the lexicon of global capital, she will dot that low skyline with bleeding-edge skyscrapers in bizarre shapes, one a triangle, one a stack of glass boxes, one shaped into two leaning towers. That’s “reinventing.” Right now, Paris is a city of stone. Mayor Hidalgo will add the same concrete-glass-steel texture that has made so many cities worldwide into banal clones. That’s “reinventing.”

Is the world really so narcotized, so mesmerized, by the words “modern” and “contemporary,” so intimidated by the stars of international architecture and commerce, so distracted by the mayor’s elegant appearance, that it can value Palmyra and forget Paris?

And can anyone really believe the mayor’s claims? Can any solar-panel magic make these glass structures sustainable? Will corporate behemoths really flock to Paris once another skyscraper, like the much-despised Tour Montparnasse, looms over the city’s six- and eight-story buildings?

How Paris Was Destroyed. As U.S. liaison for SOS Paris, the French preservationist group, and as founder of the International Coalition for the Preservation of Paris, I know this battle is just a skirmish in a larger war for Paris. We honor humanity’s delight in the uniqueness of beloved cities, Paris among them. Out-spent and out-publicized, fragilely-funded Davids, we fight for urban traditions that reach through the long and tumultuous history of Paris, defending against globalized, standardized, architecture.

The Goliaths in this drama are the deep-pocketed international corporations, star architects, and politicians at City Hall. They are the city’s free-spending promoters, pushing for a glitzier Paris. They call it a more “innovative” Paris. But that turns out to be a Paris that looks like New York, Tokyo, and all the other corporate capitals.

The mayor scored a big win last summer, when the highest administrative appeals court in France allowed City Hall to depart from the planning code and issue a building permit that will rupture the beauty of historic central Paris. Giant luxury-goods purveyor LVMH, the court said, can plunk—if you can believe it—an enormous undulating glass wall among the rows of classic stone facades on a quintessentially Parisian street, the Rue de Rivoli. Seven stories tall, without doors or windows, and at 265 feet nearly as long as a football field, it will loom up like a spaceship in central Paris.

The appeals court stressed that this alien structure is “contemporary.” But as the lower court said, in this context, it is “dissonant.” Put it in a shopping mall near a highway, and it may be beautiful. In central Paris, the ideal of urbanity, that facade is the rowdy drunk who crashes the party. Now the Rue de Rivoli will lose its glamour by a thousand cuts, one facade screaming louder than the next.

Developers argue that without such intrusions, Paris will become a museum, like Venice. In fact, Paris is one of the liveliest cities on earth. Can a glass facade disrupting the Rue de Rivoli make Paris livelier? Attract international corporations? Show me how! We preservationists do not oppose development. And Olivier de Monicault, the president of SOS Paris, freely agrees that since we must continue to build inside Paris, “demolitions are unavoidable.” We want Paris to be vital and alive, to grow. In harmony with its traditions.

How Paris Was Destroyed. City Hall has traded French elegance for globalized disruptiveness. Let the world cry out as loudly for Paris as for Palmyra! Support the people of Paris.

It is heartbreaking to think what may be lost.

ICPP founder and president Mary Campbell Gallagher’s essay “How Paris Was Destroyed” was excerpted in the “Notable and Quotable” section of the Wall Street Journal on October 3.  It originally appeared on the web site Architecture Here and Now, on September 19. This is the full version. 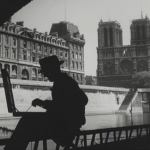 Next Story:
Who Will Save the Skyline of Paris?