The stunning news came in mid-February that Italy’s gigantic Mose project—building underwater barriers to save Venice from catastrophic flooding—might be doomed to fail. This bombshell fell after decades of planning, construction starting in 2003, 5.5 billion euros of investment, and, with greed playing a front-page role, the criminal prosecutions for corruption of numerous political figures. As revealed in the February 6, 2017 issue of the Italian periodical Espresso, a forthcoming report from Gian Mario Paolucci, a former Professor of Metallurgy at the University of Padua, targets among other defects the fact that while the hinges submitted to initial tests were of high quality, manufactured in Vicenza, the hinges actually to be installed are manufactured in Eastern Europe and of possibly fatally inferior quality.

A threatened disaster to Venice may seem far off to citizens elsewhere who complain that real estate prices are exploding, small shops are disappearing, and the young and poor are being forced out while tourists overwhelm their central streets. It may seem irrelevant to London, where skyscrapers multiply and get taller, or to Paris, where developers of skyscrapers push to introduce them.

In If Venice Dies, Salvatore Settis contends that the ills that citizens of other historic cities complain about are in fact the same as the perils that threaten Venice. In this brilliant polemic, Settis argues that the old ethical restraints have crumbled everywhere. Thus, the enemies of historic cities are universally the same: greed and ignorance of history. Today, Venice is the archetype of all of our historic cities.

Today, Venice is the archetype of all of our historic cities.

A distinguished Italian archeologist and art historian, Settis calls Venice and other historic cities the supreme creations of our civilization. But they are dying an agonizing death, he says, dwindling from cohesive social organisms into theme parks and movie sets. Settis’s arguments are persuasive, and this book should be required reading for every citizen of a historic city.

Settis relies neither on reason alone nor on his credentials as a five-star academic and former director of the Getty Research Institute in Los Angeles. A good classical rhetorician, he first readies the reader for his arguments. He starts not with Venice but with “Forgetful Athens.” That city’s citizens lost their independence and became oblivious to their city’s identity. By the Middle Ages, Athenians no longer remembered the age of Pericles or what the Parthenon was for. After telling the reader briefly about Venice, he shows where our modern cities are headed: the Chinese conurbation of Chongqing, with its miles of skyscrapers housing thirty-two million residents. But, he says, we all have a vision of the ideal city, and each city has its own unique forma urbis, its own dna.

Having reminded us of the uniqueness of every city and prompted us to gaze into the abyss, Settis finally immerses readers in the troubles of present-day Venice.

Officials, Settis says, do not study Venice’s problems—including loss of population and businesses—and their causes, nor do they propose solutions that can strengthen the city’s “social fabric, cohesion, and civic culture.” Instead, officials pronounce Venice’s problems insoluble and turn immediately to ventures that make money for the few but worsen Venetians’ conditions.

Settis targets mass tourism as the most destructive of the official nostrums. The thousands of tourists trooping down into St. Mark’s Square from their dozens of levels of staterooms on a colossal cruise ship might be shocked to hear that they and the others of Venice’s eight million tourists a year are killing, not aiding, Venice. But in fact tourists spend little in Venice, and officials until recently allowed as many as thirteen such ships every day to sail into the lagoon, Venice’s main waterway, “staring the city down, polluting its waters.” All in the name of one reward: money for the cruise ship owners.

Just along the Grand Canal, “the last fifteen years have seen the closure of state institutions, judicial offices, banks, the German consulate, medical practices, and stores to make way for sixteen new hotels.” The population of Venice’s historic center has fallen from 174,808 in 1951 to 56,072 in 2015. Tourists outnumber Venetians 140:1. Venetians must move away to find work outside tourism.

In Settis’s account, greed is the source of the “threat of irresponsible architectural projects and insane urban proposals” that hang over the city. Take, for example, the proposal for a subway under the lagoon. Marketed as “rethinking transit connections in order to save Venice from isolation,” it would threaten the city’s delicate ecological equilibria.

Venetians must move away to find work outside tourism.

Architects must take much of the blame. Today’s rampant worldwide skyscraper development Settis decries as, with rare exceptions, economically motivated real estate speculation. In Venice, as elsewhere, developers promote skyscrapers as “modernity,” uniting with local officials to defeat traditional height limits and divert land to a use profitable to themselves. But how can the monoculture of skyscrapers, which has “turned global homogenization into a supreme value,” Settis asks, be right for Venice, if skyscrapers will destroy the city’s prized uniqueness?

I am involved in architectural issues in Paris, another historic city with escalating real estate prices that is dependent on tourism and is losing population. Currently, officials are removing the law courts and other key urban functions from the center of Paris to make way for what the French art historian François Loyer calls industrial tourism. They have even announced plans to replace the square in front of Notre-Dame with a glass platform through which tourists may view the archeological remnants below. Paris, too, becomes less of a polity and more of a theme park.

Paris City Hall and developers are following the playbook for profit and blight that Settis outlines. Having compromised the traditional height limits in 2008, they promote building office skyscrapers as “modernity.” But Paris has no need for additional office space: it has at least 20 million square feet of empty office space now. And the adjacent skyscraper area called La Défense has empty skyscrapers.

To date, Venice has fended off a proposed ring of skyscrapers, Aqualta 2060, from which, Settis says, residents would look down at Venetians like fish in an aquarium, and the Palais Lumière, a skyscraper promoted by the fashion designer Pierre Cardin. Launched with a media campaign promising to inject life into a moribund city, the latter would be 820 feet high, cost 1.5 billion euros, and cover forty-three acres in Marghera, on the mainland facing Venice. The idea of regenerating a former industrial zone, Settis says, was “hijacked to justify real estate speculation.”

Challenging such “bullying” modernism, Settis argues for an ethical oath for architects like the Hippocratic Oath for physicians, requiring, most importantly, that an architect know history. In a bold analysis, resting on his deep knowledge of the history of architecture, Settis says that the aestheticization of architecture has killed ethics. Aesthetics legitimizes real estate speculation and has become a mere market mechanism in the pursuit of profit.

In command of current development theory as much as of the classical canon, Settis offers a poetic rhetoric as distinctive as his political thesis, and to pry his premises out of the dense web of his allusive text is to do him an injustice. Along the way, he argues against reproductions of historic cities and numerous other current practices, citing authorities from Aristotle to Rem Koolhaas and making frequent use of poetic fragments from Invisible Cities by Italo Calvino.

Settis provides few specifics on how the disorder and corruption in both the city and national governments are harming Venice. Anna Somers Cocks, however, treats those topics extensively in “The Coming Death of Venice?” (June 20, 2013) and “Venice: Devious and Destructive” (September 25, 2014), both in The New York Review of Books.

The dramatic new revelation of additional, possibly fatal, corruption in the construction of the Mose barriers underlines the urgency of adding Venice and its lagoon to Unesco’s list of World Heritage in Danger, as urged by Europa Nostra and others. Critics fear the influence on the government of powerful groups, including cruise ship owners, and then the Italian government’s influence on Unesco. The World Heritage Committee has postponed a decision on putting Venice on the list of World Heritage in Danger until the summer 2017 meeting of the committee.

In the end, Settis’s book, as he rightly insists, is not just about Venice. It is a passionate call to nourish low-lying, walkable Venice as an alternative urban model to skyscraper-dominated, automobile-clogged Chongqing. Beyond Venice, it is an account that can inspire everyone, especially in historic cities all over the world, who loves traditional city life and who cares for homo sapiens as a political animal.

Already known as “the conscience of Italy” for his outspoken defense of his country’s great monuments, Settis has now published this book aiming to gain support for Venice and other beleaguered historic cities, not as theme parks but as living political entities. When Settis speaks in Venice, he says, a thousand people fill the room. One can search “Venice protests” on Google to see Venetians’ efforts. But neither Venice by itself nor any other city, unaided, can overcome the powerful forces that profit from their destruction. Today, historic cities need not just political will but international support. As Salvatore Settis so persuasively argues, these cities have been the political fountainheads of our civilization. The beauty and diversity of these cities should be “an extraordinary endowment” for the future. If Venice dies, its model of engaged political life within a walkable community dies, too.

Mary Campbell Gallagher is President of the International Coalition for the Preservation of Paris, ICPP. She is editor of the forthcoming Paris Without Skyscrapers (ICPP & SOS Paris).

BOOKS IN THIS ARTICLE

MORE FROM THIS AUTHOR 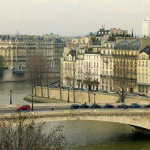 Previous Story:
Who Will Save the Skyline of Paris?
Next Story:
Seeking Density Paris Demolishes Little School in the Prairie